How RIDO is transforming rido 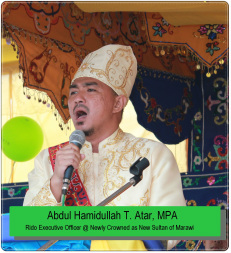 For the Muslim Maranao from the southern part of the Philippines around Lake Lanao, the word “rido” means clan feuds. Rido is a type of conflict most commonly observed in Mindanao and is characterized by sporadic outbursts of retaliatory violence between families and kinship groups, as well as between communities. But RIDO as an acronym is an organization that aims to solve this type of conflict.

The Reconciliatory Initiatives for Development Opportunities Incorporated (RIDO) have shared with the Mindanao Peacebuilding Institute Foundation, Inc. (MPI) some of the amazing efforts that they have been making to propagate peace, counter violence with understanding and resolve/mitigate conflict in the areas in which they have been working. Over the past three years, from 2010 to 2012, RIDO recounted inspiring stories of hope and reconciliation in their publication entitled Kalilintad, the Maranao word for peace. Heading this organization are MPI alumni who participated in MPI’s Annual Peacebuilding Training in 2008 and 2009, including its Executive Director, Mr. Abdul Hamidullah “Pogie” T. Atar.

Among their initiatives, RIDO has had a formal engagement with the Government of the Philippines security forces, training over 500 security personnel in local conflict resolution through the traditional justice system and in peacebuilding activities. By transforming the mindset of these trained combatants, the goal of RIDO is that the members of the security sector become more dynamic and responsive law enforcers.

The staff also shared their experience in clan-based peace organizing, in which RIDO is a pioneer, underlining the methodology’s effectiveness in resolving conflict between feuding clans and families and other forms of conflict as well as in peacebuilding in general. By building the capacity of the council of elders of the clans, identifying and training youth leaders, recognizing the vital roles of local community partners and the security sector, and in utilizing traditional processes for dispute settlement, RIDO has continued building bridges of tolerance and understanding in the provinces of Lanao on the island of Mindanao. Read more of their activities online and download their newsletter at http://ridoph.weebly.com/.